A fork in the road in North Georgia↩

While implementing integration tests for our new birom library I encountered a pattern where the implementation did not entirely match the rules described here.

The pattern in question was Fig. 6b. I tried to replay the game and found the following sequence of moves: 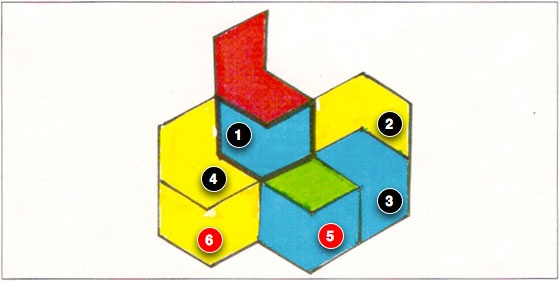 For the remainder, player A holds the blue, player B the yellow stones. Moves (1) to (4) are non-ambiguous. The order is clear and the shown sequence of stones is the only valid I’ve found.

The main question that arises is if a move made by player A can capture current player’s stones by enabling his opponent to encircle his own stones via common ground in the current move. It’s not a question of state but rather a question of sequence. Is stone (1) captured in move (5) or (6)?

Put differently, is stone (1) still captured by yellow if player B decides to put the yellow stone of move (6) somewhere else?

Update (June 30 2011): As it turned out, the pattern on the picture is invalid. The blue stone (1) is encircled when move (5) is completed. Blue allows yellow with turn (5) to encircle (1). Therefore, the blue stone can be removed from the field and be re-used by player B as an additional yellow stone.